Just published in the US is this article from the Natural Resources Defence Council Staff blog (http://switchboard.nrdc.org/blogs/jsass/defenseless_bees.htm) which highlights the increasing evidence of harm from neonicotinoid pesticides despite what the agrochemical industry keep saying. In fact it is becoming increasingly obvious that the levels of pesticide doesn’t have to be at the agrochemical industries previously stated ‘lethal threshold’ to be deemed harmful. In fact the impact of these particular chemicals is more likely to cause a decline in the bees general health and resilience to infections such as Nosema and the viruses carried by the Varroa Mites.

As staff member Jennifer Sass of the NRDC says:

‘It is now evident that even low field-realistic levels of neonicotinoids (‘neonics’) – a class of pesticides purposely designed to soak into the whole plant – are compromising the immunity of bees, leaving them unable to fend off viruses and other deadly pathogens that stress and eventually kill bee colonies. It is a deadly one-two punch. The bees are immune compromised from the pesticides, and then fall prey to mites and other viruses that kill them.’

Added to this effect on bees disease resistance is the increasing amount of evidence to support the theory of the neurotoxic impact on bees which has been noted in both honey bees and bumblebees:

‘In addition to immune system damage, a handful of well-conducted studies on honey bees and bumble bees suggest that bee colonies exposed to field-realistic levels of neonic pesticides in small but repeated or lasting (several weeks) doses have significant behavioural and functional impairments such as impaired learning, food collection, navigation, immune function, and reduced fecundity and queen production. While not likely to cause immediate (acute) death, such abnormal behaviour can hinder the ability of the colony to survive winter.’

This is supported by evidence from the Xerces Society. Their report can be accessed here: http://www.xerces.org/neonicotinoids-and-bees/

And there is a full pdf of their research available for free here:

Further evidence is available from another research paper.

‘Recent research by USDA scientist Jeff Pettis found 35 different pesticides in bee pollen – in addition to neonics – that appear to weaken the immunity of bees, leaving them unable to fend off the viruses that eventually kill them (Pettis et al 2013). Clearly, the issue of pesticide use as well as other factors affecting bees is complex. However, the evidence is clear that neonics are highly problematic and it’s time to reconsider the now pervasive use of these pesticides.’

The full research paper can be found here:
http://www.ncbi.nlm.nih.gov/pmc/articles/PMC3722151/

To those that think this is solely a problem for the US and that over here we are somehow different or immune think again. The only difference apart from accent, gun laws and size of nations are the trade names of the pesticide products on sale. They act in precisely the same way and cause the same damage. The only solution to all this controversy is to suspend permanently the use of neonicotinoid based pesticides until such time as solid evidence of benefit without harm can be demonstrated. This is yet to be conclusively proven and as some of you will already know Syngenta are currently trying to sue the EU for loss of profits due to the 2 year suspension which it claims is based on unproven evidence of harm where none exists. Clearly they haven’t read the research papers that keep surfacing saying otherwise.

The French newspaper Le Monde published another report on British research into neonicotinoids and their impact on bees and pollinators. The translation is suspect so a more readable version from the Ecology Letters journal is copied below:

Current bee population declines and colony failures are well documented yet poorly understood and no single factor has been identified as a leading cause. The evidence is equivocal and puzzling: for instance, many pathogens and parasites can be found in both failing and surviving colonies and field pesticide exposure is typically sub-lethal. Here, we investigate how these results can be due to sub-lethal stress impairing colony function. We mathematically modelled stress on individual bees which impairs colony function and found how positive density dependence can cause multiple dynamic outcomes: some colonies fail while others thrive. We then exposed bumblebee colonies to sub-lethal levels of a neonicotinoid pesticide. The dynamics of colony failure, which we observed, were most accurately described by our model. We argue that our model can explain the enigmatic aspects of bee colony failures, highlighting an important role for sub-lethal stress in colony declines.

This is the longer translated account by Stephane Foucart of the research findings. At the end of the article it becomes clear that the author has doubts about the regulatory system in the EU: http://www.lemonde.fr/sciences/article/2013/11/07/pesticides-les-mathematiques-au-secours-des-abeilles_3509916_1650684.html

The last part of the newspaper article is below.

‘However, the British study shows undeniably, like others before them, that the regulatory test protocols that allow the placing on the market of insecticides are inadequate: they do indeed determine the lethal dose and n does not assess the subtle effects of chronic exposure to non-lethal doses. These weaknesses regulatory tests are also known for a long time: a report of experts of the European Food Safety Authority (EFSA) already pointed in May 2012 …’

The translation may not be what the readers are used to but the gist of this articles points are very clear. ‘The pesticides are on the market, they cause harm to pollinators but the regulatory process that was used to get them there is deeply flawed.

The readers probably already know that but sometimes it takes a newspaper article to make the point clear.

My view for what it is worth is that the Precautionary Principle needs to be invoked, the regulatory processes need to be reviewed in depth by an independent body and the EU body responsible for the health and safety of our environment needs a damned good kick up the backside for allowing this set of chemicals to be used for food production and domestic use.

But that is only my opinion. Others think differently. 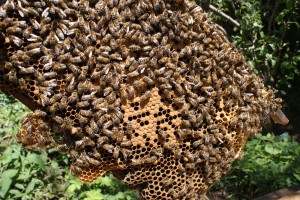 A healthy comb like this may become a thing of the past if something is not done soon.

We welcome any donation to the cause no matter how big or small.
Recent Posts
Archives
Categories
Like Box